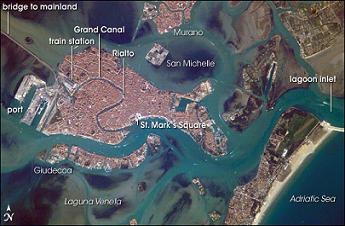 The Venice Cruise Port (‘port’ on the picture) has several terminals for cruise ships and ferry boats. The main facility is the Marittima harbor nearby the historic centre between Tronchetto and Piazzale Roma. The terminals of San Basilio and Santa Marta are located at the waterfront of the Giudecca Canal nearby the Marittima. Venice cruises are popular vacations. In 2010, the passenger port had more than 2 million passengers: 1.65 million people from cruise ships and 350.000 people from the ferry boats.

Passengers who are staying in the historic centre and want to go to the Marrittima harbor can travel first to Piazzale Roma. Water bus 2, 42 and 52 sails from Giardini (Castello district) via St. Mark’s Square to Piazzale Roma. At Piazzale Roma one can take a land taxi (3 minutes/up to €20), a free shuttlebus (if available), the land funicular (named ‘venice people mover’) or to walk (15/20 minutes). The land funicular looks like a small electric tram. It brings passengers from Piazzale Roma to the cruise port in less than 3 minutes. It operates every 8 minutes between 7.00 in the morning and 23.00 in the evening. Ticket is 1€. Most expensive is to take a private water taxi from downtown to the cruise port; price would be at least €60. 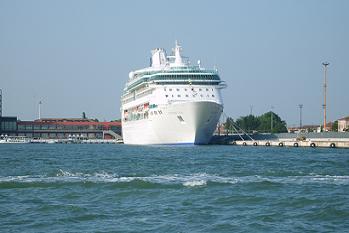